How it's made // Ocean Sole

The colorful Ocean Sole images are not only great to see, the story behind the images is also inspiring and impressive. As soon as one hears which material has been used to make the images, one looks full of disbelief; flip flops (flip-flops) ?!

Passionate about the oceans, sustainable and aware of the importance of ecosystems, Ocean Sole tackles pollution through flip-flops and other plastics.
A large proportion of the world's population - particularly in developing countries - runs on foam foam (polyurethane) flip-flops. This footwear is cheap in purchase, but not durable in use. This, combined with an underdeveloped waste processing system, ensures that the flip flops in countries such as Kenya end up in nature and ultimately in the oceans. With all consequences for humans and animals. 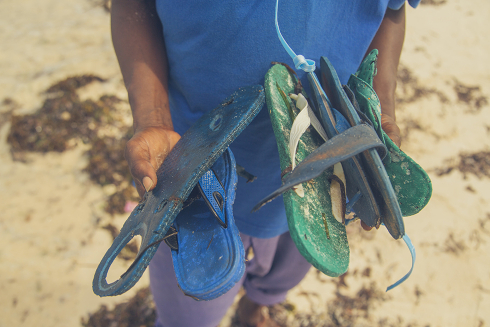 Waste that floats in the sea is carried away by sea currents and often stays behind in a place where these come together, this is called the 'Plastic Soup'. The Plastic Soup is a large 'island' of floating plastics that has formed in the oceans. Due to the salty seawater and ultraviolet light, this plastic slowly disintegrates into very fine pieces.
Many of these small plastic particles end up in the stomachs of birds and sea animals via the food chain, resulting in poisoning and disturbance of the hormonal system in these animals. In addition, a large part of the Plastic Soup (including the flip flops) washes up on the beaches of Kenya.

The washed-up flip-flops are collected and cleaned by employees of Ocean Sole. Subsequently, the flip flops are glued to large blocks, from which the creative team of artisans carves the most beautiful sculptures. Elephants, giraffes, lions, rhinos and many more well-known African savannah animals come to life from the flip-flops. Every Ocean Sole artist has his or her own specialism. For example, one artist is better at forming the smallest models, while the other ventures to the greatest creations!

Ocean Sole contributes to a solution for three local and global issues that affect everyone: it prevents and remedies the pollution of land and sea by these plastics, it creates employment and the limited logging for works of art.

The artworks of Ocean Sole tell an important message about the importance of the protection of the marine environment and by their cheerful colors they simultaneously conjure a smile on the face of many people!

Some figures at a glance:

Sign up for our newsletter and receive a little gift with your first order!